Dr Antoine Goetchel's honorary doctorate from the University of Berne 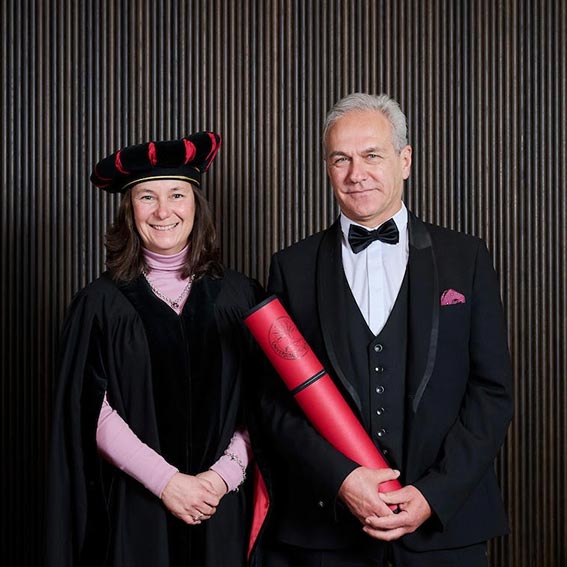 The team at GAL would like to extend our warmest congratulations to Dr Antoine Goetschel, Founder and Director of GAL, for being awarded an Honorary Doctorate by the University of Berne. This prestigious accolade recognises the pertinence of Antoine's pioneering work in animal rights and animal protection law in Switzerland through his numerous writings, practical advocacy as an Animal Lawyer in the Canton of Zurich, and successful campaigning to further the moral status of animals in the Swiss Federal Constitution. Antoine continues to pioneer the development of global animal law reform through GAL.

Described as a "creative mastermind" by the University of Berne, Antoine has worked at the forefront of animal rights and protection law in Switzerland. Following his graduation from the Faculty of Law and Political Science, University of Zurich, in 1983, Antoine took the Zurich Bar Examination and pursued a Doctorate in Law, in which he specialised in animal rights law. Following a number of years practising at the Bar, he went onto found the Animal in Law Foundation in 1995 alongside lecturing in animal protection and veterinary law at the University of Zurich. Between 2007-2010, Antoine became the first specialist lawyer for animal protection in criminal cases in the Canton of Zurich, and in 2014, he founded the Global Animal Law (GAL) Association over which he presides.

During his career dedicated to the enhanced protection of animals, Antoine has successfully campaigned for the "dignity of the creature" to be recognised by the Federal Constitution and contributed significantly to the incorporation of the "Policy article animals" into Federal Law. Through his work with GAL, Antoine continues to advocate for animals worldwide through the development of a new UN convention - the UN Convention for the Health and Protection of Animals - alongside other leading animal lawyers from across the world, which seeks to recognise and offer animals protection at UN level for the first time.

We hope you will join us in congratulating Antoine for his endless dedication to the legal protection of animals which, no doubt, will inspire future generations of animal lawyers to ensure that animals are given a voice.

A note from Antoine F. Goetschel, J.D., Dr. h.c:
From my own personal point of view, the honorary doctorate, I confess, means a great deal to me. Of course, the high university appreciation of my work since 1985 for a more warm-hearted world with a special focus on the animal, and this with the means of the law. Furthermore, through the honorary doctorate of the Faculty of Law of the University of Bern, I recognize the recognition of the animal in law as a serious scientific field of law. This clear signal should be understood far beyond the borders: Create chairs on the animal in law and in economics and thus support the work towards a more animal-friendly, healthier world on a scientific basis. Happy about this development, I call on all readers to participate.
Best regards,
Antoine F. Goetschel

Dr Antoine Goetchel's honorary doctorate from the University of Berne

Article in the International Association of Lawyers UIA

Afg talk on UNCAHP and on Reducing Animal Suffering through Law