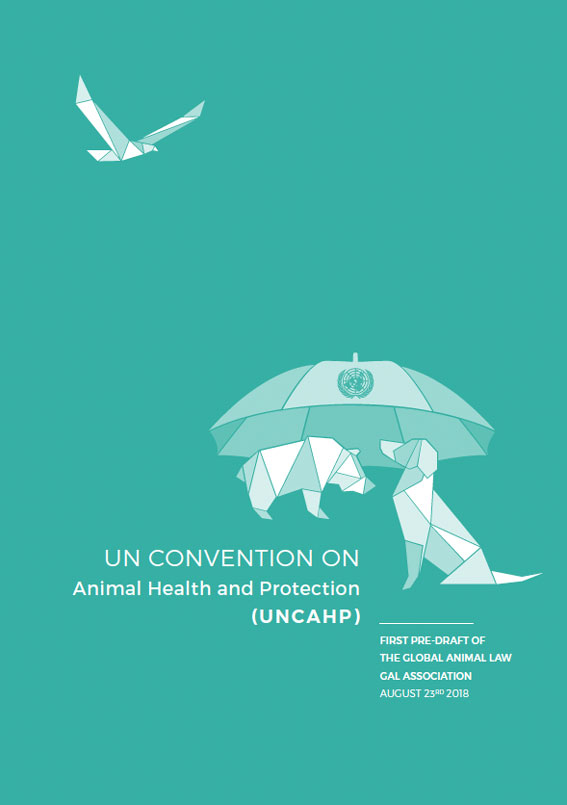 UNCAHP is the global far-reaching project of GAL. To date, animal protection does not appear in the UN agenda. Therefore, GAL calls upon the UN to adopt a convention on animal protection.
GAL's position is that:

GAL Founder and President, Antoine F. Goetschel and other GAL experts having key backgrounds in international animal law and animal welfare, have drafted the UN Convention on Animal Health and Protection (UNCAHP). The finished UNCAHP draft contains all important points for a considerable increase in the worldwide level of animal protection trough the pillars of legislation, law enforcement and education in national and global animal law.

This UN Convention proposal can prevent, as an example, shifts of animal-unfriendly practices to some countries, which are prohibited in more protective animal-friendly countries.

The UN Convention covers animal protection broadly, including animal welfare and animal health. This allows for wider support from veterinarians and animal scientists, knowing that UNCAHP is endorsing the One Health/One Welfare approach. Furthermore, the draft takes into account the local and national conditions as well as their implications. It also allows for cultural differences in the consideration of animal welfare pertaining to individual nations.

Within the framework of the GAL's campaign for the global protection of animals, the ministries of foreign affairs of each nation are where support of UNCAHP must be obtained.

In 2019 and 2020, GAL was able to bridge the gap between the UNCAHP and the UN. GAL has expanded its network of relationships and is in contact with various lobbying partners and other important contacts working with the UN. The system of the UN and the ways of bringing UNCAHP to the UN General Assembly are key to GAL's strategy.

In 2021, the next steps are to have UNCAHP better known across the general media, obtaining the support of influential organizations and strengthening GAL's collaboration with strategically identified partners. GAL will work on targeted public relations with the media, government agencies, institutions and co-creators worldwide.

As a further step, UNCAHP will be submitted to the UN in accordance with GAL's roadmap and the UN agenda, according to the findings on the optimal procedures identified. GAL is also part of the UN Major Group involved in the UN discussion and contributes with highly qualified expert opinions in oder to propose key solutions. Here, the assistance and cooperation of GAL's network of partners can be counted on, such as the International Policy Forum (IPF) some of whom have a direct access to the UN and its related committees.

Furthermore, the social movement for animal protection is increasing on all continents, and it is spreading to nations besides the traditionally more animal-friendly nations. Careful and objective campaigns will be aimed at raising the national level of animal protection worldwide.

All member States of the UN will be called upon to support UNCAHP as the global convention for animal protection.

Even though the legal situation is complex, the willingness to take action within the UN is gaining traction. GAL purports that such a convention is crucial to provide due consideration to the actual welfare of animals through the law, as an important issue per se, which properly finds its place in the priorities of the UN alongside the Sustainable Development Goals (SDGs).

Two important pillars for the UNCAHP project are the GALFI and the GAL Info and Service Hub.

For more information, please go to the UNCAHP website.